What's the Difference Between Botox and Dysport?

You may have heard about Dysport but aren't sure about it.  How does it compare to Botox?  Read on to find out!

Are Dysport and Botox Exactly the Same?

Not quite.  Both are Botulinum Toxin Type A but the Dysport molecule is slightly smaller than Botox's.

Are There Any Advantages of One Over the Other?

Studies show that Dysport starts to work within 24hrs. whereas Botox takes up to 72hrs to start to work.  This may or not matter to patients much.

There is no difference in how long they last.

Having said that, some patients have a better response to Dysport and prefer it over Botox.

Yes and no.  It's cheaper per unit but we have to use 2.5 times the units to get the equivalent effect as Botox.  Most practices charge around the same for Botox and Dysport.

Does Dysport Have a Points Program?

Yes.  Dysport has its own points program, called Aspire.  You can use it to gain discounts on Dysport and the injectable filler Restylane.

Dysport is $6 per unit.  In practice, because we have to use 2.5X the number of units to get the same effect, this works out to be the same price as Botox. 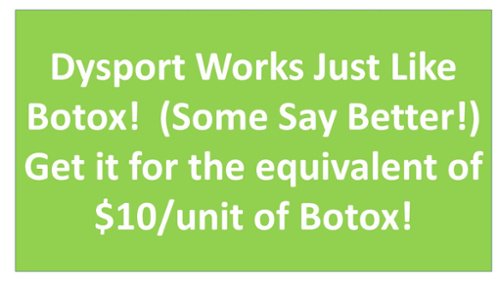 Dr.Jeffrey Horowitz is a Board Certified Plastic Surgeon committed to his patients' health and beauty.

All of us at Jeffrey Horowitz Plastic Surgery are dedicated to our patients' well being.  We provide cosmetic surgical and non-surgical services in Bel Air, MD.  We'd love to count you among our happy patients!